The March is Friday June 10th starting at around 6:30PM at the Parkman Bandstand on Boston Common. Below you'll find info on the schedule, our COVID policies, our performers, and the set-up on the common. 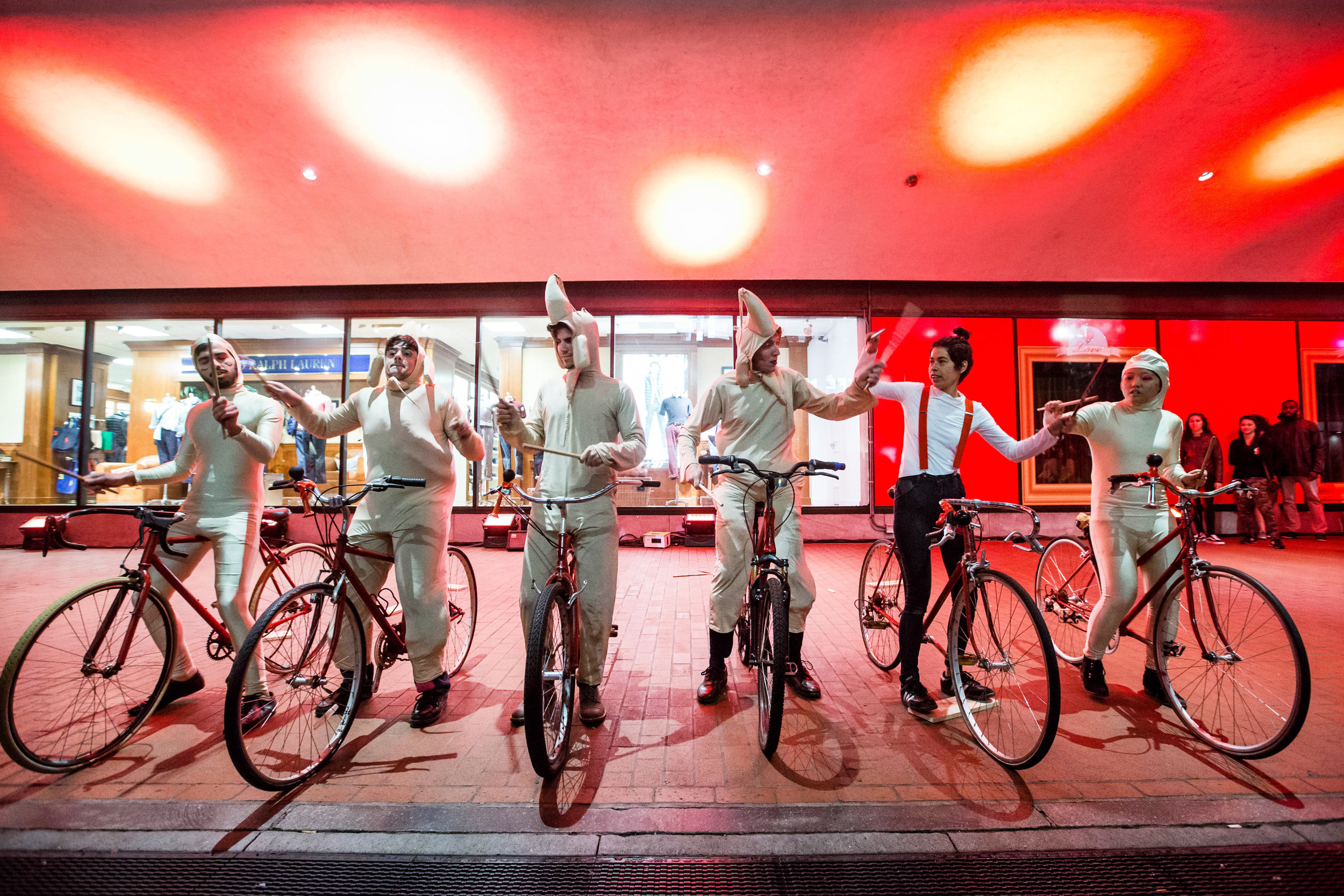 Founded and directed by Reynaliz Herrera, IDEAS, NOT THEORIES is a theatrical percussion company for unconventional instruments that offers several programs featuring Reynaliz’s original music for bicycles and other instruments. At Boston Dyke March 2022, she will perform her program: “Ideas, Not Theories- Bicycle Orchestra”. IDEAS, NOT THEORIES, has performed since 2012 in the U.S (Massachusetts, NYC, Maine, Philadelphia, CT, N.H, New Mexico), Mexico and Canada at international festivals, museums, and theaters. Reynaliz Herrera: Director/Composer/Lead performer. 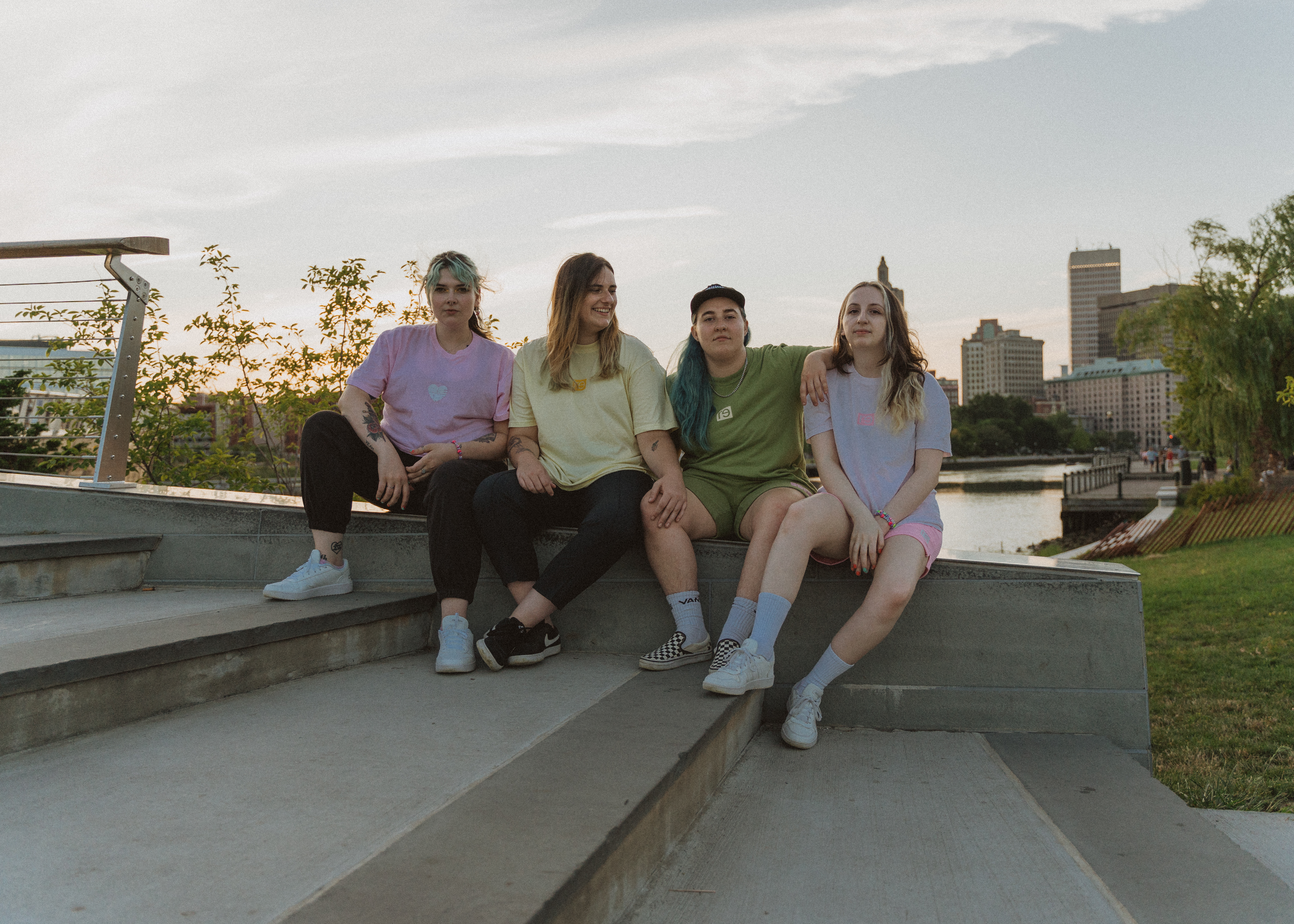 Boston-based band shallow pools has been steadily gaining momentum since first emerging on the music scene in 2018. After releasing their sophomore EP “headspace” in mid-2021, the band’s sonic shift solidified an authentic and exciting new direction. With artful instrumentation and vibrant hooks, shallow pools dove headfirst into the shimmer-pop world, and they haven’t looked back since.

Following the release of “headspace,” shallow pools was nominated for three Boston Music Awards, and they were also featured in a spotlight by re—inc, a clothing brand owned by USWNT players Megan Rapinoe, Christen Press, and Tobin Heath, and Meghan Klingenberg. The band just completed an East Coast tour supporting Fearless Record’s Set It Off in April, and they are releasing two new singles this spring.

Composed of Ali Ajemian (drums), Glynnis Brennan (vocals), Jess Gromada (guitar), and Haley Senft (bass), the quartet creates their own emotive blend of pop music, pulling inspiration from artists like CHVRCHES, The Naked and Famous, and Eric Nam. As members of the LGBTQIA+ community, shallow pools brings their collective personal experiences to the forefront of their music, creating queer anthems perfect for the next coming-of-age movie.

With high ambitions and new music on the horizon, shallow pools is ready to tour the world and continue making waves within the shimmer-pop genre. 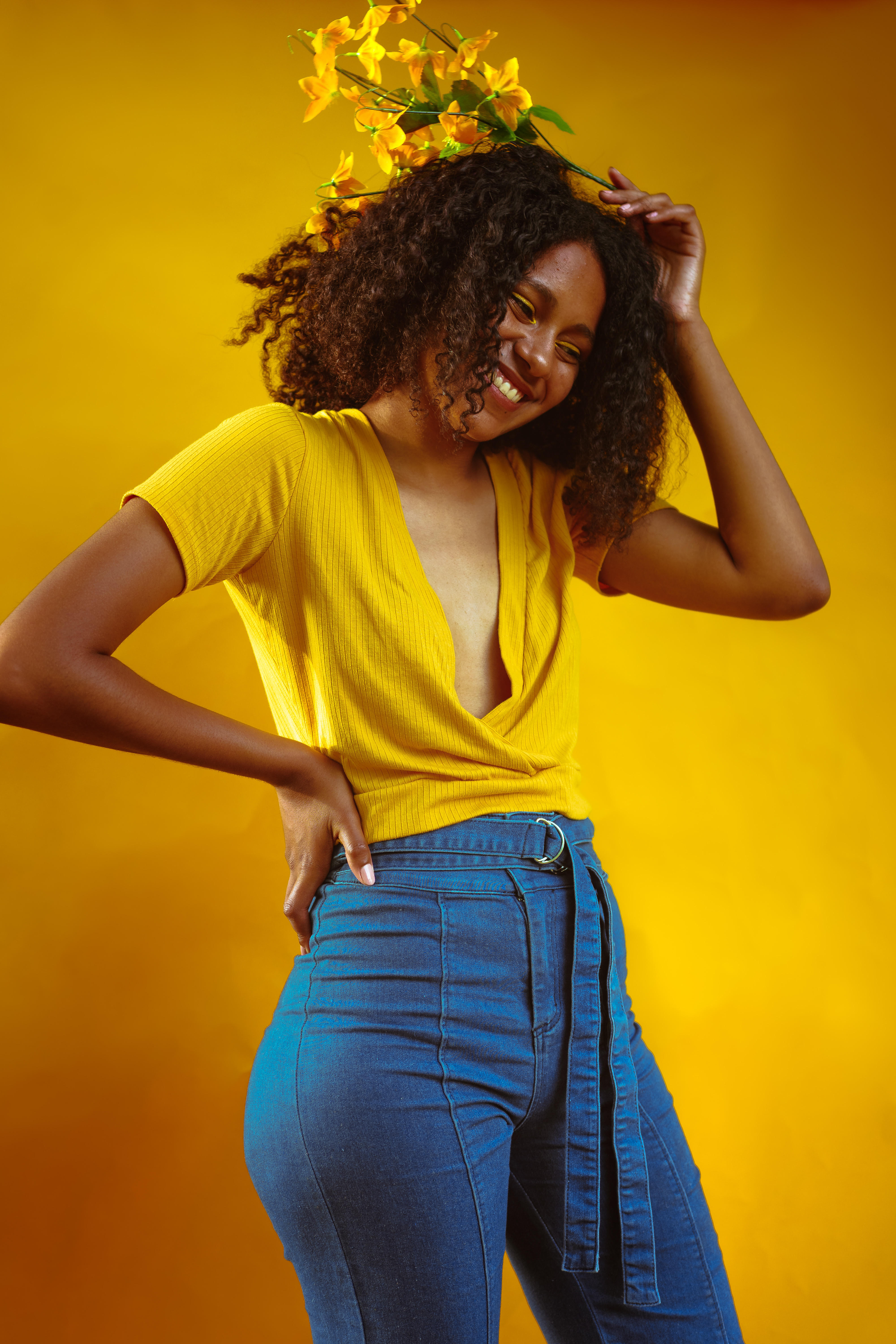 Kayla Blackburn is a singer-songwriter and audio engineer from California. She graduated from Berklee College of Music in December 2021 with a degree in Music Production & Engineering.

Kayla currently works in the Greater Boston area at Plaid Dog Recording, Boston Conservatory, and Club Passim. She also is a freelance recording, mixing, and mastering engineer. She has engineered for artists such as Keyon Harrold, Biitchseat, and Kendrick Ryan

When it comes to songwriting, she draws inspiration from songwriters like Patty Griffin and Tracy Chapman, with her folk-inspired songs that pull you in and remind you of the profound, yet painful human experience. When it comes to producing and engineering, her favorite niche to work in is pop-punk, reminiscent of what she grew up listening to.

Her musical background prior to her audio education consists of songwriting and classical voice training. Her background as a vocalist has made her passionate about choral music and vocal production, exploring the intersection of choral arrangements and technology

Matali (he/they/it) came to the Dyke March through Bagly, and is this year's youth poet.

Number Ten (pronouns they, them, he, him, she, her) moved to Boston in the early 1980s for employment in healthcare and was involved with the early treatment of AIDS while enduring the loss of every gay male friend.

They joined the Dyke March committee in 2008 and will share the committee’s experiences of organizing, promoting and fundraising prior to the ascendancy of social media.

An avid supporter of burlesque and queer performance Number Ten has recently started constructing a federation called This Old Queer to explore opportunities for generational connection and building queer families.

Michael Cox (he/him) is the Executive Director of Black and Pink Massachusetts. Michael is a butch queen on a two-fold mission to dismantle the prison system and to build stronger communities. His work is informed by his lived experience in the prison system, his scholarship, and the endless stream of letters from our inside members. You can often find him in policy spaces or building community with other people who have been directly impacted with the criminal legal system.

Michael was appointed by the Massachusetts Attorney General’s Office to serve on the Special Commission on the Health and Safety of LGTBQI Prisoners, tasked with investigating the correctional system. At the federal level, he co-chairs the National LGBT / HIV Criminal Justice Working Group’s formerly incarcerated subgroup. He was the recipient of the Massachusetts Transgender Political Coalition’s 2021 Trans Ally Award, The History Project’s 2020 Lavender Rhino Award, and was a 2020 Fellow of JustLeadershipUSA’s Leading with Conviction leadership training program. He has worked with Black and Pink in a variety of roles since 2014.

COVID is not over, so we'd like you to help us protect our community by bringing a mask and wearing it at all times during the March and in designated areas on the Common

Your mask should fit tightly to your face and cover both your nose and mouth.

We reccomend an n95, kn95, or similar high quality mask. Cloth or surgical style masks are less effective against omicron and subsequent variants.

While on our March Route, we're asking folks keep their masks on at all times.

Especially when talking or yelling, keeping your mask on protects you and your fellow Marchers.

Folks with no symptoms have been shown to spread COVID. You may be contagious without knowing it and the consequences can still be deadly. Please do your part to keep everyone safe and continue to make the Dyke March an accessible space for all folks!

Our Accessibility Vehicle will require n95s, which will be provided if you need a ride so we can ensure everyone wears a high-quality mask inside the vehicle.

While on the Common, we're asking everyone to please mask:

For extremely high risk individuals, we will be offering a livestream on Youtube.

Below is the approximate set-up of our activities on Boston Common. Please note the required Masking Areas 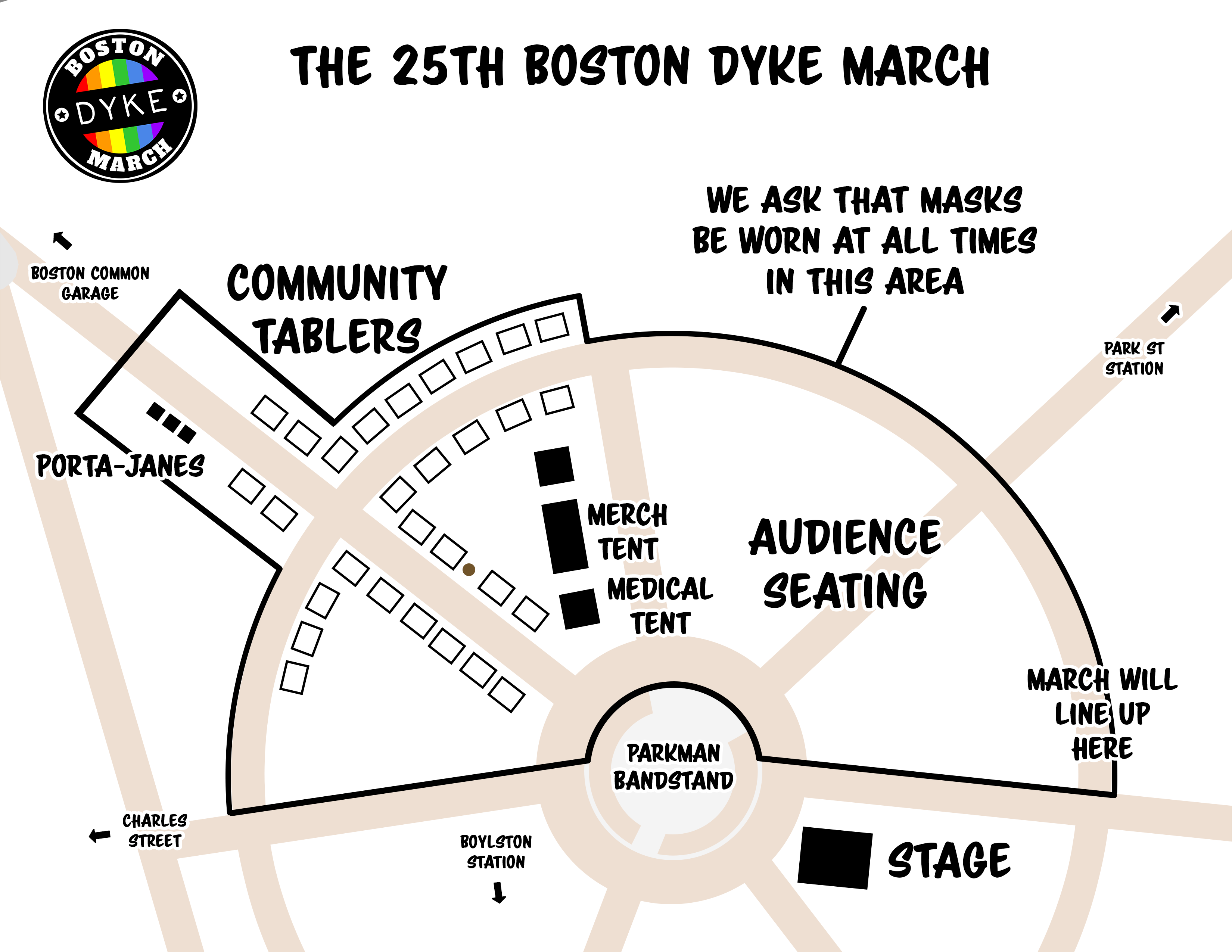